I'M NOT READING THAT!

Recently I heard something from a group of librarians that got me thinking.  There was a discussion about boundaries in YA fiction and a librarian said that, in her experience, teenage readers tend to self-censor.  So, for instance, if they started reading a story and found the content too violent, too scary, too sexually explicit, they will put it down and move on to something else.


I was heartened and rather surprised to hear this but wondered how widespread this could be.   I presume (maybe incorrectly) that younger children routinely self-censor.   I imagine they stop reading a book if it upsets them, maybe because of a storyline that disturbs them (years ago one of my kids was particularly upset by a book about a rather menacing bear that hid in a cupboard under the stairs in the family’s house – no wonder he was upset!)  However, do teenagers generally behave in the same way?

I started to think back to my own reading habits as a teenager.   I read many entertaining, popular books as well as works of great literary merit, but, if I managed to get my hands on a wholly inappropriate book I, just like all my peers, was delighted.   Of course, we knew that we shouldn’t be reading these novels, they were invariably books marketed for adults (we didn’t have a separate YA category and it was the era of Jackie Collins and Jilly Cooper) and we knew that our parents certainly wouldn’t approve but, of course, this made these trashy books, even more alluring.   Although, in retrospect, I must have had some censorship skills as, even as a teenage reader, if I came across a load of nasty violence in a story I just skipped the offending pages. Also, the innate teenage feminist in me didn’t approve of simpering female characters dominated by beefy men and that would be a good enough reason to give up on a book, no matter how racy.   However, there was only one sure thing that would make me stop reading and that was if the story was boring and, according to my quick research, that reason is still No.1.

You see, intrigued by this notion of teenagers self- censoring their reading, I decided to undertake a straw poll of, mostly, older teens.  I asked them (via their mums) had they ever stopped reading a book because the content was too much for them.  Now immediately you may feel that my poll is fatefully flawed as no teenager will give an honest answer to this question to their mum!  However, the answer in my poll was resoundingly, no.  Both the boys and girls questioned said that the only reason that they had ever stopped reading a book was if they found it boring.  They certainly weren’t put off by content that their parents might deem unsuitable. 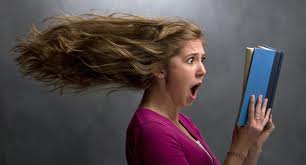 Of course, all teenagers are different so I can’t generalise about self-censorship habits.  It would be wonderful if teenagers were self-aware enough to stop reading a book if they find the content upsetting or disturbing.  But teenage years are often spent pushing against boundaries, asserting independence (as long as you don’t have to cook or clean for yourself) and breaking a few rules.  Sometimes we only find out what our individual boundaries are by breaking them.  Maybe that’s why so many teenagers end up with their heads down the toilets at parties because they just don’t know when to stop drinking.  They may have to repeat this experience several times until they fully understood their boundaries (or was that just me) but it probably makes more of a lasting impression because they worked it out the painful way.


So, can this theory be applied to choice of books?  Parents, teachers and carers set boundaries for teenagers because they care about them, not because they are a bunch of fascists.  That’s why they may not want them to have access to certain books.  They may take the time to explain why they feel a book is inappropriate, they may even confiscate books (I’ve done this before) but inevitably there will always be teenagers whose curiosity and resolve is only increased by talk of ‘inappropriate books’.  However, even if they end up reading the ‘unsuitable’ book cover-to-cover, some teenagers might discover that their parents were right (although they’ll never admit it) because the book has left them feeling queasy or sullied.  Or maybe they won't be able to make out what all the fuss was about and found the content all very tame (in which case, be worried!)


When we think of censorship, it’s usually because of depictions of sex, drug taking and violence but what about the question of whether teenagers ever self-censor purely because of the subject matter of the story, even when it doesn’t involve graphic sex and/or violence.  This is a whole different area (and needs a separate blog post) and also involves the issue of adults censoring  books for them because of controversial subject matters.  This area, for me, is far more complex and riddled with ethical questions than the thankless task of trying to keep ‘smutty’/violent books out of teenage hands.
If you’re a teenager I’d love to hear whether you’ve ever self- censored a book and why?  If you’re a parent or someone who works with young adults, what’s been your experience in this area?


Paula Rawsthorne is the author of the award winning novel The Truth About Celia Frost
www.celiafrost.co.uk