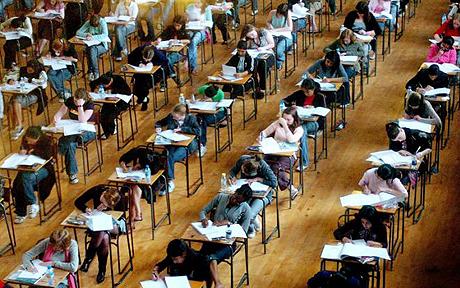 January is on the way, and that means exam time for thousands of British teens. These are closely followed by exams in May and June. School years 11,12 and 13 covering the ages 15 to 18, are dominated by external examinations.


As a writer of contemporary teen novels, this unrelenting load of exams is a complete pain. How can my teen protagonists have a social life, have adventures, do interesting things when they’re working so hard?  My latest book features two clever sixthformers, with their sights set on Oxbridge. How to give them time to get to know each other amid all their essays and revision?


What’s more, Michael Gove plans to change everything. Do I write about GCSEs and A levels, or try and pre-empt the eBacc, which is due to come in in a few years time…if it goes ahead? If I put a line in the musical I’m writing about Drama GCSE is that going to date instantly?


There are various approaches to the problem that I’ve noticed recently.  Some writers talk about GCSEs, but it's clear they think of them like old-style O levels….two years of study and then an exam at the end. Others transform the British system into something much more American (Night School by CJ Daugherty takes this approach to the point where there’s a reference to Headmaster Rowe – it doesn’t stop the book being very entertaining and compelling ). Others throw in a reference or two to coursework, or free their teens from the classroom somehow -  in my most recent book, Another Life, both narrators have dropped out of school by the end. In Rockaholic, C J Skuse writes about a teenager who has left school at 16.

Watching my own children going through the British school system I feel they are ridiculously overloaded with tests, they make life-changing changes too early and, after this year's GCSE debacle, I have no faith in the fairness of the system or the people meant to enforce it. I agree with those who say that our kids don’t need exams at 16. It’d be a bonus for me as a writer as well.