This week we find Edge author Dave Cousins in Dr Frankenstein guise, preparing for a spot of reanimation …

Real life often finds its way into what we write, but it doesn’t usually happen the other way around!
When I was making up fictional favourite bands for Oz – the narrator of my second teen novel Waiting for Gonzo – I was just having fun, trying to build a fully three-dimensional character. I like ‘music’ in books – lyrics or references to songs lets you share the soundtrack of the character’s life and takes the reader deeper into the story.

I chose to invent bands in Waiting for Gonzo because musical taste is so personal – I didn’t want to use existing artists that readers might not like! Oz is also a bit of an elitist – it seemed logical that he would only listen to obscure music that nobody else had heard of. That moment of ‘discovering’ a new band, feeling that they somehow belong to you, creates a special bond between the listener and the artist, and it was important to the story for Oz to have that.

I had hours of fun coming up with names, song titles and … yes, I’ll admit … entire discographies for Oz’s favourites! Everything was fine, until the idea was raised that readers might want to hear what Dead Frank’s Supersonic Milkfloat or Cyclops Dog actually sounded like. But you can’t listen to imaginary songs by bands that don’t exist … or can you?

A long long time ago, in a faraway galaxy … I played in a band. We had a record deal and were almost famous for a while …

I rang up my old bandmate, Michael – the inspiration for Dead Franks’ Michael Death in the book.

“Er … you wouldn’t fancy writing a song for me would you?”

“A song?!!!” (I could actually hear those exclamation marks rattling down the phone!)

I explained. He didn’t sound convinced.

Twenty-four hours later Spilt Milk by Dead Frank’s Supersonic Milkfloat was blasting out of my speakers. 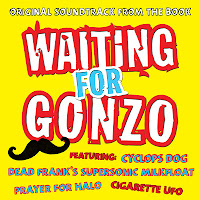 Two months later we had recorded a full soundtrack album, featuring ten original songs by Oz’s favourite bands – each with a unique sound and style: from the sci-fi, pop-punk of Cigarette UFO to Dead Frank’s Supersonic Milkfloat and their brittle brand of tongue-in-cheek lyrics and angry Telecasters; the epic gothic rock of Prayer for Halo and, of course, the magnificently monocular, sunshine pop of Cyclops Dog. Ten imaginary songs by bands that don’t exist. Except, now they do …

When I go into schools to talk to young people about Waiting for Gonzo it's interesting to see the reaction when I mention the soundtrack. In any group of pupils there are going to be some not interested in reading, but the majority I speak to like music. Whether or not the songs will provide an alternative way into the book remains to be seen – but if listening to the soundtrack or watching the videos makes one "reluctant reader" give the book a go, it won't be a bad thing …

A single from the album is being officially released on Monday (8 July 2013). It will be available to download from all the usual music sites and eligible for the charts! It’s even got a video!! All proceeds from the single will be donated to Bliss, the UK charity working to provide care and support for premature babies and their families.

I’m not expecting Sunglasses by Cyclops Dog to be a number one … but you never know. Sometimes life can be stranger than fiction! 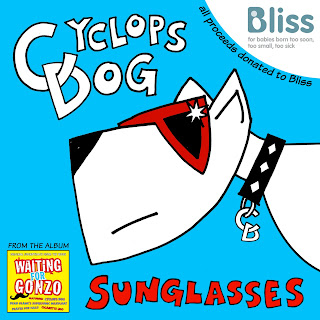 Sunglasses by Cyclops Dog will be available to download for 79p* from iTunes, Amazon and other good music sites. (* prices may vary, but all proceeds go to Bliss)

Waiting for Gonzo by Dave Cousins, is out now in paperback and BBC audiobook.
Posted by Edge Writers at 14:49