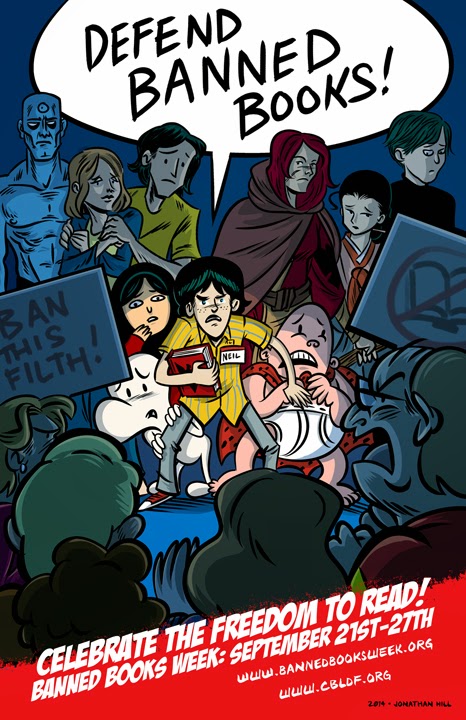 This week is Banned Books Week in America, when libraries, bookshops and book-lovers unite to draw attention to the problem of censorship. It may seem surprising in this day and age but censorship is still rife around the world, with the USA “The Land of the Free” challenging over 300 titles in 2013 alone – and ironically one school in Texas chose this week to ban a further seven books.


Perhaps unsurprisingly “edgy” young adult books are among the usual targets of book-banning, and whilst there are more than a few complaints on religious or political grounds, often the complaints are raised in order to try to “protect” young adults from material the protesters deem “inappropriate”.

"Young adult is a big trend right now, and a high number of complaints are directed at those books," said Barbara Stripling, president of the American Library Association, which organises Banned Books Week. "There is a lot of pressure to keep teenagers safe and protected, especially in urban areas, and we are seeing many more complaints about alcohol, smoking, suicide and sexually explicit material."

Racism, homosexuality, offensive language, sexually explicit scenes, gritty topics like suicide and drugs, and talking animals, are all listed as valid reasons for challenging books. I was baffled to find books as popular and famous as Anne Frank’s  “Diary of a Young Girl”, John Green’s “Looking for Alaska” and Rainbow Rowell’s “Eleanor and Park” on this year’s list, with Harry Potter, The Wizard of Oz, Alice in Wonderland previously in the firing line.

But young adult fiction often faces another accusation: that it is 'unsuited for age group'. Is this because younger readers are straying into the teen section? Or is it teens themselves protesters are trying to protect?

"Teenagers tell us that they like to read about what's going on," Stripling said. "They say 'what do they [adults] think we are?', as if teenagers remain naive and uneducated when facing these issues every day. The best way to protect them is to give them an array of things to read. If they are over-sheltered, they will enter the world without coping skills." 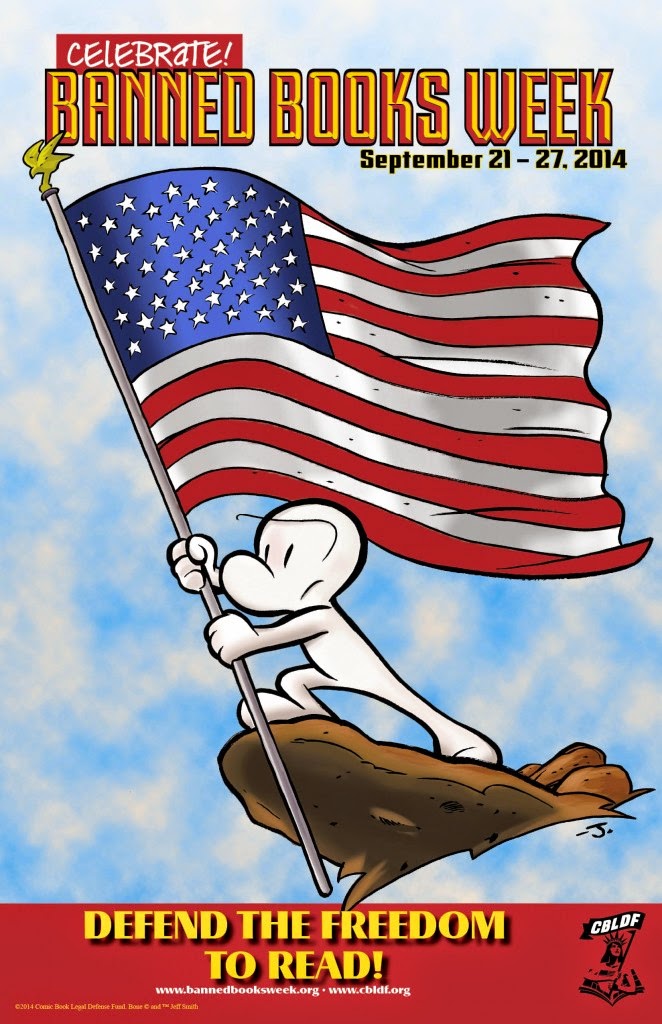 After all, what better way to first encounter such “edgy” issues than through the safety of a book, which has by its very nature in a way already been through a process of vetting, via agents, editors, and marketing teams before even reaching publication?

Ironically, of course it is often the very books that are banned that teens deliberately gravitate towards – after all, what’s more enticing than forbidden fruit? But if we succeed in banning teenagers from the books they enjoy, don’t we risk turning them off reading altogether?

I’d love to hear if any of you have encountered book censorship? Authors, have your books been censored either by editors or other gatekeepers?

Meanwhile, test your knowledge and see if you can guess the book that was banned or challenged from the complaint given in the Banned Books Quiz:

1) This parody of classic children's fairy tales replaces the traditional 'happy ever afters' with something else altogether... most of the characters meet gruesome endings. Unsurprisingly it regularly features on the American Library Association's list of banned and challenged books.

2) This 1975 novel tackles themes of teenage sexuality head on. One of the most frequently challenged books in the US because of the use of suggestive language, the detailed depiction of sex, and because her teenage character goes on the pill. "This is the first book I read simply because it had been 'banned'!" - Maarya, Newham Libraries.

3) With more than fifty million copies sold worldwide, this is one of the best-selling books of all time. It extols the virtues of kindness and respect. It was banned by the South African government during the Apartheid era because of the word 'Black' in the title.

4) This epic fantasy trilogy has been banned as 'satanic' in some areas and was even burned by members of a church in New Mexico in 2001. The controversy is ironic, though, as the author was a devout Christian and many scholars note Christian themes in his work.

5) The main character in this novel keeps a notebook containing scathing assessments of those around her, and her nanny tells her that “Sometimes you have to lie. But to yourself you must always tell the truth". Objections were made to US schools on the grounds that the book encouraged children to lie, disobey authority, talk back and use foul language.

6) This picture book was banned by schools and libraries in the US in 2009 yet based on a true story of two gay penguins hatching an egg in New York’s Central Park Zoo. School authorities in Charlotte, North Carolina, Shiloh, Illinois, Loudoun, Virginia and Chico, California all banned the book. The American Library Association reports that this was the most challenged book of 2006, 2007 and 2008 and the single most banned book of 2009 in the US.

7) The narrator of this novel describes scenes from his life in a series of letters to an anonymous person. This book was banned in the USA for reasons of: homosexuality, sexually explicit, anti-family, offensive language, religious viewpoint, unsuited to age group, drugs and suicide.

8) Translated into 60 languages, this diary has sold over 30 million copies worldwide since it was published in 1952. Yet the book is banned in Lebanon for depicting Jews positively; Schindler’s Ark and Sophie’s Choice are also banned.

9) In 1931 this classic children’s book was banned in Hunan province not for its allusion to mind-altering substances, but because it included talking animals. Governor Ho Chien said that it was “disastrous” to depict “animals and human beings on the same level”.

10) This family memoir told via three generations of women in her family gave many Western readers their first insight into life in China under the iron rule of Chairman Mao’s Communist party. With over 13 million copies sold, it is reportedly the biggest selling non-fiction paperback of all time, but has remained banned in China since its release in 1991.


How many did you get right? :)
1) Revolting Rhymes by Roald Dahl 2) Forever by Judy Blume 3) Black Beauty by Anna Sewell 4) The Lord of The Rings by J.R.R. Tolkien 5)  Harriet The Spy by Louise Fitzhugh 6) And Tango Makes Three by Justin Richardson 7) The Perks of Being a Wallflower by Stephen Chbosky 8) Diary of a Young Girl by Anne Frank 9) Alice in Wonderland by Lewis Carroll 10) Wild Swans by Jung Chang