The YA Book Prize by Keren David

For the last few months  I’ve been part of a team. You might call it #TeamYA.  I was lucky enough to have my book Salvage shortlisted for The Bookseller’s inaugural YA Book Prize, and, despite the best efforts of the wonderful people running the process to turn us into rivals, we shortlisted authors all knew we were on the same side really. 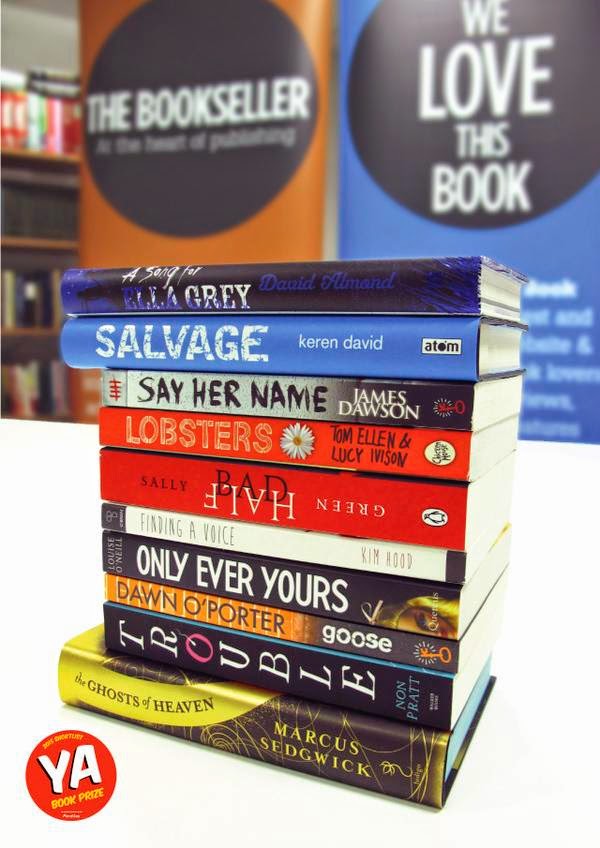 The shortlist turned into a showcase for the breadth of YA, helpfully nudging forward the perennial debate ‘What actually is Young Adult fiction?’    There was horror, comedy, romance, literary fiction, contemporary realism and dystopia on the list. Debut authors and old hands. Protagonists of both genders (no perceived bias towards boy or girl centred books, which was refreshing), and aged from early teens to near-adult.
I have no idea how the judges made their decisions, and what criteria you use to decide between such different books. I’m only grateful that my book was one of them, because I can think of many other books that could have been there, such is the talent of the UKYA and Irish YA communities.
The Bookseller promoted the prize with huge energy, with reviews, Twitter chats, a tumblr blog, a Facebook page, interviews and swag.  Bookshops and libraries put on special displays.  Supporters of my book were encouraged to shout about being on #TeamSalvage (a hashtag more generally used by a skateboarding team in Alberta), but in truth, most readers were generous about all the books, and many took on the challenge of reading and reviewing the whole lot.
The process culminated in a prize-giving event at Foyles in central London. As you can see from the video above I was so excited that my voice went all squeaky.  Maybe it was the thrill of seeing my book displayed in the Foyles window, alongside the other nine shortlisted books. Of course, it was disappointing not to win -  although I could make a case for almost every book winning – but what a worthy winner we had in Louise O’Neill with Only Ever Yours, a book with the concerns of the teenage girl at the heart of every sentence, and an ending far darker than any YA book I’ve ever read, including The Bunker Diaries.


Being part of this amazing prize was one of the highlights of my career so far, and I can only dream that one day I might be shortlisted again. Thank you The Bookseller for creating the prize, celebrating UK and Irish YA, and giving us so much to think about along the way.