When I start a new novel, one of the first things I do is write a one- or two-page proposal. It includes my working title and a movie-style pitch (Willy Wonka meets Jack Bauer – that’s not my pitch, but maybe it should be. A kick-arse chocolatier? Hmmm...). I also create a short synopsis and brief character sketches for my main characters. And I include a few lines about why I feel compelled to write this story. What will keep me interested for the next months and, if it’s published, maybe the rest of my life?

So in my initial musings on what I’ll affectionately call Book3, I noted that my main characters would uncover plans for a horrifying and-yet-to-be-determined event. I wanted said-event to be original, shocking and significant. I considered an idea that came to me after 9/11 – a type of terrorist attack. (An idea that I can’t bring myself to mention in this blog for fear of giving budding terrorists any new nasty ideas.) Beads of sweat began to form on my forehead. Even if I had something interesting to say, a compelling story, and a new twist -- did I really want to add to the culture of fear and violence?
I'm not sure I can write that book.
Writing edgy fiction for teens can be a tight rope walk. I want to write authentic, issue-based stories that ask difficult questions, but another part of me feels a sense of responsibility to protect my teen readers.
Unlike writing fiction for an adult audience, I’ve also got a series of gatekeepers who stand between me and my reader. Even if I’m comfortable with the issues and antics in my story, teachers, librarians and parents might not be.
And it’s not always the big issues that can off-set this delicate balance. What about characters that don’t wear seatbelts or condoms, smoke cigarettes or drink to excess? I’ve got great ideas for silly pranks that might not always turn out well. I have an obligation to readers to write the most honest and interesting story I can. But I must admit I sometimes feel the desire to write “don’t try this at home”.
The bottom line for me: I’m a storyteller – not my readers’ parents, teachers or ministers. My job is to keep them engaged in the story and, I hope, make them think about something in a new or interesting way. But I have limits and so do my gatekeepers. Writing on the edge is about striking a balance – while remaining true to yourself and your story.
Anyone fancy a tango on the high wire? I think it might be easier than figuring out Book3...

DARK PARTIES -- a dystopian novel for young adults -- by Sara Grant will be published by Orion in October. Find out more about Sara and her book at www.sara-grant.com.
Posted by Edge Writers at 12:14 10 comments:

Getting Boys to Read 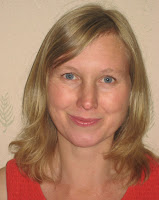 Edge Writer Paula Rawsthorne asks
“What will get more teen boys reading?”
I don’t want to generalise about the reading habits of teenage boys - I personally know just as many boys who are voracious readers as boys who wouldn’t dream of voluntarily picking up a book.  However, there is no getting away from it.  There are a lot of reluctant teen readers out there and the majority of them are boys.
Research keeps finding that, after junior school, many boys stop reading for pleasure and seem uninspired by the books they are forced to read in school.  A survey of 500 secondary school English teachers reveals a picture of many boys who simply lose interest in a book if it’s longer than 100 pages (and far less than this, in many cases).
Pearson’s the publisher, undertook the survey and publicised it this week to coincide with the launch of the `Heroes’ series.  These short books are in genres that particularly appeal to boys and are coupled with a website with teaching resources and group exercises that hope to get boys back into reading.  The wonderful writer, Frank Cottrell Boyce is series editor of ‘Heroes’.  He says, “Our hope is that the stories will be shared and enjoyed by pupil and teacher alike because pleasure is the most powerful motivation.”

I can empathize with these boys.  They may view those longer, literary novels they study in school the way I view `Wolf Hall’.  It’s been propping open a troublesome door in my house since I bought it- Yes!  I know I should read it.  I know Hilary Mantel is a genius, but blinkin’ heck, look at the size of it!
Some might argue that the use of shorter story books in the classroom is just pandering to kids who should try harder to concentrate.  Some might argue that, no matter what the word count, if a book is compelling enough, the boys will be drawn in and want to finish it.
But will the introduction of short, boy orientated books lead to more teachers ditching the novels that are considered of greater literary merit, or, is this the way forward to get reluctant boys into the habit of reading for pleasure?  Perhaps one day, like me, it will lead them to purchasing a tome such as Wolf Hall (and using it as a door stop).
Paula Rawsthorne’s thriller for young adults ‘The Truth about Celia Frost’, is published by Usborne on 1st August.  Find out more at www.celiafrost.co.uk
Posted by Edge Writers at 23:50 7 comments: 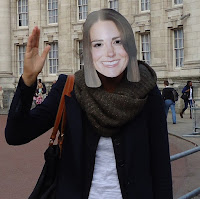 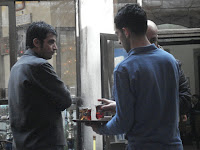 Miriam Halahmy's new novel, HIDDEN, was published in March 2011 and is about two teenagers who rescue an illegal immigrant from the sea and hide him to save him from being deported.
www.miriamhalahmy.com
Posted by Edge Writers at 12:46 5 comments:

Sex on the Edge by Keren David

There are all sorts of ways that sex can make a teen book edgy.
There’s rape, and sexual assault. There’s gay sex between boys, lesbianism, bi-sexuality. There are teenage pregnancies - from the boy or girl’s perspective. There’s harassment,  phone sex and prostitution.
There’s underage sex, sexting, porn and stalking. All important topics, all ways in which a dash of sex might get you banned by anxious parents and librarians, talked about by teens.
But funnily enough, these aren’t necessarily the most controversial books, nor the hardest to get published.
No, one of the edgiest ways of putting sex into a novel for teens is to write about a girl who has sex, enjoys it and doesn’t get pregnant, humiliated, diseased or married.
Funny, that.
Keren David's first book for teens When I Was Joe won the North East Teen Book Award 2011. Her next book, Lia's Guide to Winning the Lottery is out in August. Find out more here
Posted by Edge Writers at 17:32 7 comments: