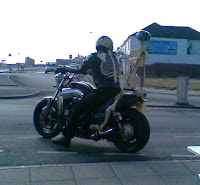 One of my excuses for writing contemporary gritty teen fiction is that I convince myself it gives me the licence to revisit the risks of my youth. So in my current cycle of novels set on Hayling Island I have teenagers falling into dangerous seas, riding motorbikes and going rock climbing. 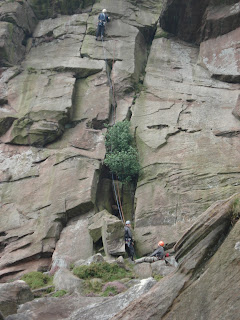 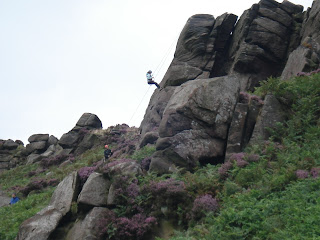 I’m working on the edits to the third book in the cycle, Stuffed, at the moment, which is why my rock climbing days on the gritstone edges of Derbyshire such as Stanage Edge, are very much on my mind. I’ve sent my characters off to Derbyshire on a freezing cold weekend in November. Their leader is nineteen year old Max who has had a lot of experience but none of the others have ever climbed before. That means extreme, scary, risky and ultimately a mega-accident. Great fun! 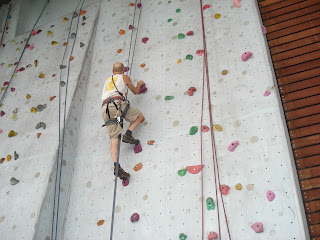 To write these chapters I had to do some serious research of course. I spent quite a bit of time at the climbing walls in North London, watching beginners and speaking to more experienced climbers.

This is Mark 'Zippy' Pretty setting a new climb on the wall at Swiss Cottage, North West London. He's one of the UK top climbing instructors. 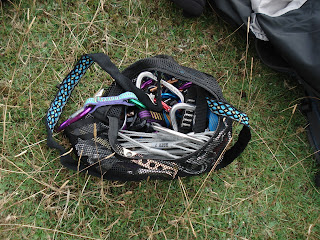 I then took myself off to Derbyshire for a couple of days, taking photos, asking millions of questions about equipment and watching climbers abseil, overcome terror and sometimes, skid back down to the ground again.  It was all great fun and I came home with enough notes to write my chapters.
I even wrote a poem.
Severe at Stanage Edge
There are three kinds of sweat;
effort sweat as you jam upwards, hand over hand,
inching the crack, feet skintight in rock shoes.
A curlew calls overhead, you tip,
feel the hallucinatory pull of gravity
the easy fall, effort done,
nothing coming up to meet you
but ground. Then in reverse,
cheek pressed to the grazing rockface,
you breathe, damp all the way to the fingertip
and you’re in prickly sweat;
flowing like a river from armpit to bra,
drenching pants, knees, socks,
until fear sweat breaks out.
This is the worst, when you know the rock rules
and it’s not fear of height or the fall
but of failing at the crux
if you don’t go for it, have it and to hell with gravity.
This is climbing, this is vertical, nothing comes close.
©  Miriam Halahmy
What risks do you take when you write? 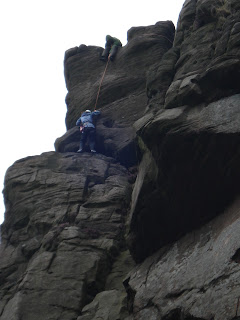 Words on the Edge by Keren David 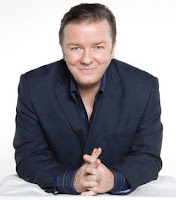 Ricky Gervais has made a career out of teetering on the edge of comedy -  by portraying himself and his fictional characters as cringe-making blundering idiot. He's clearly got a genuine and intelligent interest in testing the limits of acceptability. That,one assumes, is why he's decided to make a prat of himself by using the word 'mong'.
Many, many people have pointed out how hurtful, bullying and wrong this is, how it's a step back to the time when people with Downs Syndrome were seen as less than human. I recently read the excellent Westwood by Stella Gibbons, written in the 1930s which conveys rather chillingly the distaste and disdain felt for Downs Syndrome children.
I have a particular hatred of the word 'spaz'. In the UK, it's generally recognised as a derogatory term for people with Cerebal Palsy, people who used to be known as spastics. When I was at school, spaz and spastic were very regularly used cruel insults. As the sister of someone with cerebal palsy, I feel sick when I hear those words.
However, in America, 'spaz', while coming from the same root, has evolved to mean -  apparently -  a geeky or clumsy person. It's explained here. And as British teens hear the American use of the word on American TV shows, it's gradually coming back. Which horrifies me.
Part of me feels that we should be robust enough to cope with language as it is used, and not censor ourselves too much. I thought long and hard about whether to use 'gay' as an insult in When I Was Joe, and felt it was so much a part of why Ty was who he was -  and did what he did -  that it was unavoidable.
My writing group (female, middle-aged, politically left-leaning) would sometimes complain about my male characters' sexism (so very mild compared to, say, The In-Betweeners), and I'd defend it, in the name of realism.
The In-Betweeners is a great example of offensiveness rendered very funny by its framing. Does it still offend? Does it matter?
So, readers and writers of YA fiction, how offensive is too offensive? What should we reflect, what should we censor? And can our decisions make a difference?
Posted by Edge Writers at 08:29 11 comments:

Paula's blog about ebooks with soundtracks got me thinking about the relationship between words and music. They go together like, well, music and lyrics, don't they? Or is music disruptive to the reading process? Do you like to listen to music while you read or write? Does the muse like music? If so what kind of music? Is it whatever happens to randomly come onto your radio or mp3 player? Or do you have particular music you like to listen to whilst reading/writing particular books? Do you have play-lists for specific books, even? After all, film soundtracks have long proven effective, practically essential, tools in capturing and enhancing the atmosphere of a story, so why can't songs/music do the same for books?


Some books feature music heavily in the narrative itself. Nick Hornby's High Fidelity is centred around the playlists of its protagonist, and how the songs reflect different moments in his life. And likewise, many songs are based on novels - Wuthering Heights by Kate Bush; Moon Over Bourbon Street (Anne Rice's Vampire Chronicles) by Sting; Romeo and Juliet by Dire Straits, Love Story (also Romeo and Juliet) by Taylor Swift. 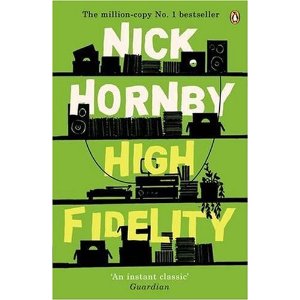 But while music can enhance and inspire our books, and likewise many lyrics are inspired by novels, you'll notice that lyrics themselves rarely feature in novels. Writers beware! There is a reason for this. It's because record companies impose hefty fees for inclusion of their lyrics - a fact I was totally unaware of till my fellow Edgars gave me a heads up - thank you! I had wanted to include four words from "It's Raining Men" in my debut novel, Someone Else's Life, for which the record company were going to charge me over £600! Song titles, however, are fair game, so I'll stick to those in future!
Stephanie Meyer says she can't write without music, and has compiled a playlist of "music I hear in my head while I read the book", consisting of:
1. "Why Does it Always Rain on Me?" — Travis
2. "Creep" [radio edit] — Radiohead
3. "In My Place" — Coldplay
4. "I'm Not Okay (I Promise)" [video edit] — My Chemical Romance
5. "With You" [reanimation remix] — Linkin Park
6. "By Myself" — Linkin Park
7. "Dreaming" — OMD
8. "Please Forgive Me" — David Gray
9. "Here With Me" — Dido
10. "Time is Running Out" — Muse
11. "Tremble for My Beloved" — Collective Soul
12. "Dreams" — The Cranberries
13. "Lullaby (Goodnight, My Angel)" — Billy Joel 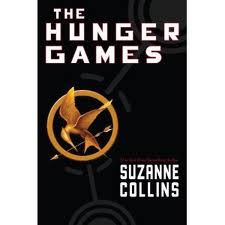 I wonder if her readers would all agree? Or come up with any alternatives?
What playlists would you choose for your favourite book? It would be interesting to compare what different people choose for the same book, so I'd love to hear your suggestions, either for your own favourite book or (to compare) how about Twilight? Romeo & Juliet? The Hunger Games?

I'd love to hear what you come up with.
Someone Else's Life will be published by Simon & Schuster in the UK and Delacorte Press in the US & Canada in February 2012.
Posted by Edge Writers at 08:33 3 comments:

Banned Books: On no account should you read this … 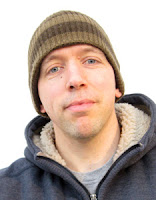 Edge author Dave Cousins on the curious incident of the dog in the locker.
A couple of weeks ago I read an article about a student in an American high school, running a library of banned books from her locker. What started as a small act of rebellion against censorship, turned into something much more significant and interesting, when she discovered that her classmates wanted to borrow and read the books because they had been told they shouldn’t.

“Before I started (the library), almost no kid at school but myself took an active interest in reading! Now not only are all the kids reading the banned books, but go out of their way to read anything they can get their hands on. So I’m doing a good thing, right? ”


A few days later I read in the press about the cancellation of  an appearance by award winning children’s author, Meg Rosoff, at an independent school in Bath. Having somewhat belatedly realised that the novel she would be talking about, There Is No Dog, explored the idea of God as a nineteen year old boy, the school felt that inviting Rosoff to speak would not be an appropriate reflection of their Christian ethos. 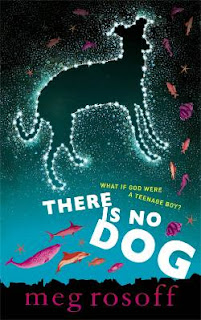 The discussions that followed this news, both publicly and amongst friends and fellow writers were passionate and wide ranging in opinions. As far as I was concerned this reaction served as a perfect illustration as to why young people should be encouraged to read and discuss books such as There Is No Dog, precisely because they are thought provoking and stimulate debate.

In an interview on Radio 4’s Open Book programme some weeks before her event was pulled, Meg Rosoff said that her intention when writing the book had been to simply pose questions that would make readers realise that somebody else was thinking about these issues. And that she believed it was part of the writers job “to look at the dark questions of life.”

I don’t wish to enter into a specific debate about There Is No Dog, or the school’s decision to cancel Meg Rosoff's visit. I would like to suggest however, that books tackling some of these “dark questions” provide an excellent opportunity for schools to engage students in informed debate. Hiding away from an issue or a difficult question won’t make it go away. Ignorance, fear and prejudice will merely continue as a result. Whereas a generation of young people who read widely, and are encouraged to explore different viewpoints and ideas, will surely be better equipped to shape our world in future.

A final thought. The library in the locker clearly showed that young people like to read what they’ve been told not to. The question is – how can we stimulate similar interest in books that haven’t been banned? Your thoughts on this would be most welcome.

Dave Cousins' debut novel for teenagers, 15 Days Without a Head comes out in January, published by Oxford University Press. On no account should you read it …


Please note that all opinions in this post are those of the author alone.
Posted by Edge Writers at 08:36 5 comments: