Edge Author Katie Dale asks How Important is Location in Fiction?
Is it important where a story is set? At first consideration it might not seem to matter too much, and in some cases the location is pretty interchangeable. For example, Sam in Before I Fall could pretty much attend any US high school – or even be relocated to the UK, as the teen social scene is fairly similar (which is one of the reasons the book is so thought-provoking – this could happen to anyone.) But imagine Wuthering Heights set anywhere but the Yorkshire moors, or The Beach anywhere but Thailand. Indeed, sometimes location even almost becomes a character in its own right, such is its impact on the characters and plot.

Location affects among many things the climate of the story, the culture, the laws the characters must live by, what they wear, how they speak – the list is endless. Consequently, choice of location must be considered carefully.

Some authors choose real-life locations – Forks in the Twilight saga (whose largely overcast and inclement weather proves beneficial to its resident vampires); Hayling Island in Miriam Halahmy’s Hidden (vital as the location Alix encounters an illegal immigrant); others use real locations under a fictional name (e.g. Sarah Dessen’s Lakeview is based on Chapel Hill, North Carolina); whilst yet others create worlds all of their own – Middle-earth, Hogwarts, Oz, Neverland, Wonderland, Narnia – where the reader is reliant on the author to paint absolutely every detail for them in their imagination. What a responsibility – and what an opportunity!

Detail is equally important when using a real place – it must be accurate enough that if a reader visits (or lives there) they will find it as described in the novel. In my upcoming book, Someone Else’s Life, my main character, Rosie, discovers she was swapped at birth and tries to trace her real family to the States. Luckily, I had visited all the US locations, but when I did research to flesh out the details I discovered that sometimes fact is even more incredible than fiction! – I could never have invented a giant lobster-pot Christmas tree or the giant black and white photos covering the pier! 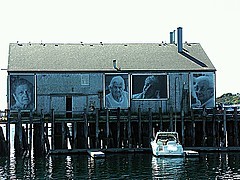 Whether real or imaginary, as well as affecting and enhancing the plot, a well-created sense of place enriches the reading experience no end. To feed the reader’s imagination in such a way that they actually feel like they’re physically transported to that setting – seeing, touching, tasting and smelling everything around them – is one of the most powerful things about fiction, truly bringing a story to life. Wherever a book’s location may be – real, imaginary, or somewhere in-between – perhaps the most important thing is that it must feel real for the reader. I'll always remember feeling Lyra's cold in Northern Lights, the stickily warm exotic night air in Sarah Singleton's The Island, and Lucy's delighted amazement as she steps through the wardrobe into a snow-covered Narnia, and I thrill at the knowledge that at any time I can revisit any one of these places and many, many more besides, simply by opening a book.

What are your favourite literary locations? Do you prefer real places or imaginary worlds?