Writing and Revealing -- the Striptease of Fiction

I’m a compulsive list-maker. I never met at matrix I didn’t like. And, spontaneous is not my middle name nor really a welcome word in my vocabulary. (My best friend once suggested that I needed to plan to be more spontaneous – now that sounds like me!)
When it comes to writing, I proudly declare that I’m a plotter. I whole-heartedly agree with Albert Zuckerman, author of Writing the Blockbuster Novel: “No sane person would think of setting out to construct a skyscraper or even a one-family home without a detailed set of plans. A big  novel must have the literary equivalent of beams and joists strong enough to sustain it excitingly from beginning to end, and it also must contain myriad interlocking parts fully as complex as those in any building type.”
But I’ve learned to leave room for surprises. I do all my plotting homework but, when I sit down to type the words into my computer, I let my unconscious weave a tale among my well-placed mile markers. I love it when my characters suggest a new path that I seemed to have unconsciously cleared. 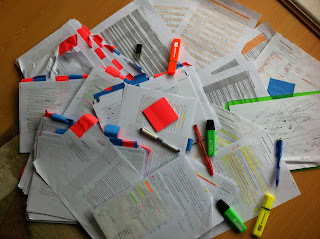 At both the plotting and revision stages, I will create charts and graphs examining character arcs and plot points. There will be Post-it notes and highlighters, coloured pens and sometimes Crayons.
Even after all this careful analysis, I’m still surprised by my own fiction. When I, at last, read my story in printed form without pencil in hand, I often find that I’ve given away more of myself than I intended.
I heard Hilary Mantel speak about her memoir Giving Up the Ghost. Someone asked if it was odd to have complete strangers know so much about her life from her memoir. She said something like: in a memoir she controls what her readers know about her life, but in her fiction she unconsciously reveals so much about herself.
My debut novel, Dark Parties is, in part, a tribute to my grandma. My main character Neva’s grandma is basically my dad’s mum. I wanted to, in some small way, capture my grandma on the page and immortalize this wonderful woman who meant so much to me.
I also don’t hide my feminist leanings. I endeavour to write strong female characters who are more than a love interest. In Dark Parties, it’s the women who lead the rebellion. In my next book Half Lives, it’s a young teen girl who must re-build civilization.
And I sometimes sneak in first or last names of friends and family. It’s sort of a wink to their significance in my life but it’s also a funny way to detect who has actually read the book.

But then there are these other influences that come shining through only after I’ve signed off on the final proof. For example, in the first few lines of Dark Parties, Neva says that her father would finally be proud of her. It’s a small, but significant, thread that runs right to the end of the story. It wasn’t one that was planned but one that was cultivated when it appeared in the first draft. At the time I began to write Dark Parties, my father had been diagnosed with cancer. He is alive and well, but at that time I was struggling with being so far away from my family. (I’m an American living in London.)
You learn a lot about yourself while you're crafting a story. You take the time to ponder things like the meaning of love, diversity, identity, religion and, well, life. It’s cheaper than a psychiatrist. But having your novel published for all the world to see sometimes feels like dancing a striptease at a literary festival. (I suppose it's the writerly equivalent of my teen stress dream where I walk through high school naked.)

I’ve just received few advance reader copies Half Lives and distributed them to select friends and family members – so the dance begins again. I wait with excitement and anxiety at what they might find between the pages. I hope they enjoy the dark and tangled thriller I’ve created. (One friend as already commented: “so strange that such a cheery person could write something so dark.”) The book’s political and religious commentary is completely intentional. But I’m nervous about what has slipped in, what I’ve revealed unintentionally.
This type of unconscious exposure is not unique to writers. You can learn a lot about someone based on what he/she reads. No two people read a book and hear the exact same story. I realize I haven’t written one book I’ve written thousands – the one that I intended to write, the words that end up printed on the page and then the story each reader takes away. I’m often astounded by what readers discover in the pages of my book.
What do the books you write and read reveal about you?


Sara Grant's second teen novel Half Lives will be published in May in the UK and July in the US. Learn more about Sara and her books at www.sara-grant.com or follow her on twitter @authorsaragrant.
Posted by Edge Writers at 09:56