It didn’t occur to me, when I wrote The Weight of Souls, that I was launching myself right into the middle of a hot debate.
The Weight of Souls is not an ‘issue book’ per se, but it does deal with one thing in particular: bullying.  I was quite badly bullied for years and I really reached back into those feelings to bring Taylor and her school situation to life.
However, the issue I thought I was writing about (bullying) has been taken over by something else.
My protagonist is a bullied teenage girl with a backbone of steel.  She has a deep loyalty for her friends and love for her father.  She misses her mother every day.  She deeply resents the family curse that is her tragedy – it has taken her mother from her and will result in her own insanity and early death.  She sees dead people.
And she is NOT WHITE.
Suddenly I am being asked about racial diversity in YA fiction, an issue I actually know little about.  My gorgeous book cover is being applauded for the fact that it has an Asian girl on the cover and people are excited about reading the book purely because it has an Asian protagonist. 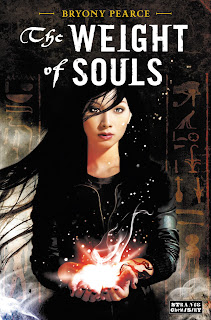 Frankly this terrifies me.
I wrote Taylor as a person, the way I saw her.  I didn’t intend to address issues of racial diversity in YA fiction.  Now I’m worried that my portrayal of her will offend.  Is she too ‘British’?  Should I have spent more time in the book on her cultural heritage?
I feel as if I’m holding an unexploded bomb.  I am anxiously awaiting reviews by people who are going to buy the book because they see themselves on the front cover.  I am worried that they will hate Taylor for failing to come through for them in the way they want her to.
It is a sad indictment of the industry that my cover has generated so much excitement, that people are sitting up and taking notice because my own protagonist is Asian.
There should be more books that star non-white, middle class characters.
All teens should be able to pick up books that appeal to them on a visceral level, in which they can see themselves and which allow them to open up about the issues that face them because they see their favourite heroes and heroines facing the same issues.
I hope that my cover is in an early wave of ‘honest’ covers, that we will no longer see confusingly ‘Anglicised’ protagonists in art.
There is an excellent post here that shows examples of the whitewashing of YA covers:
http://www.yalsa.ala.org/thehub/2012/12/10/it-matters-if-youre-black-or-white-the-racism-of-ya-book-covers/
YA author Justine Larbalestier has gone public to say this:
“Editors have told me that their sales departments say black covers don't sell. Sales reps have told me that many of their accounts won't take books with black covers. Booksellers have told me that they can't give away YAs with black covers. Authors have told me that their books with black covers are frequently not shelved in the same part of the library as other YA-they're exiled to the Urban Fiction section-and many bookshops simply don't stock them at all.”
I hope that my book does sell, I hope that it is one among many who will prove the booksellers wrong.
And I hope that very soon books about non-white protagonists are common enough that the creation of one is cause for neither celebration nor debate.
In the meantime I hope that Taylor helps touch those who have been or are being bullied, no matter what their skin colour.