In praise of curiosity...by Keren David 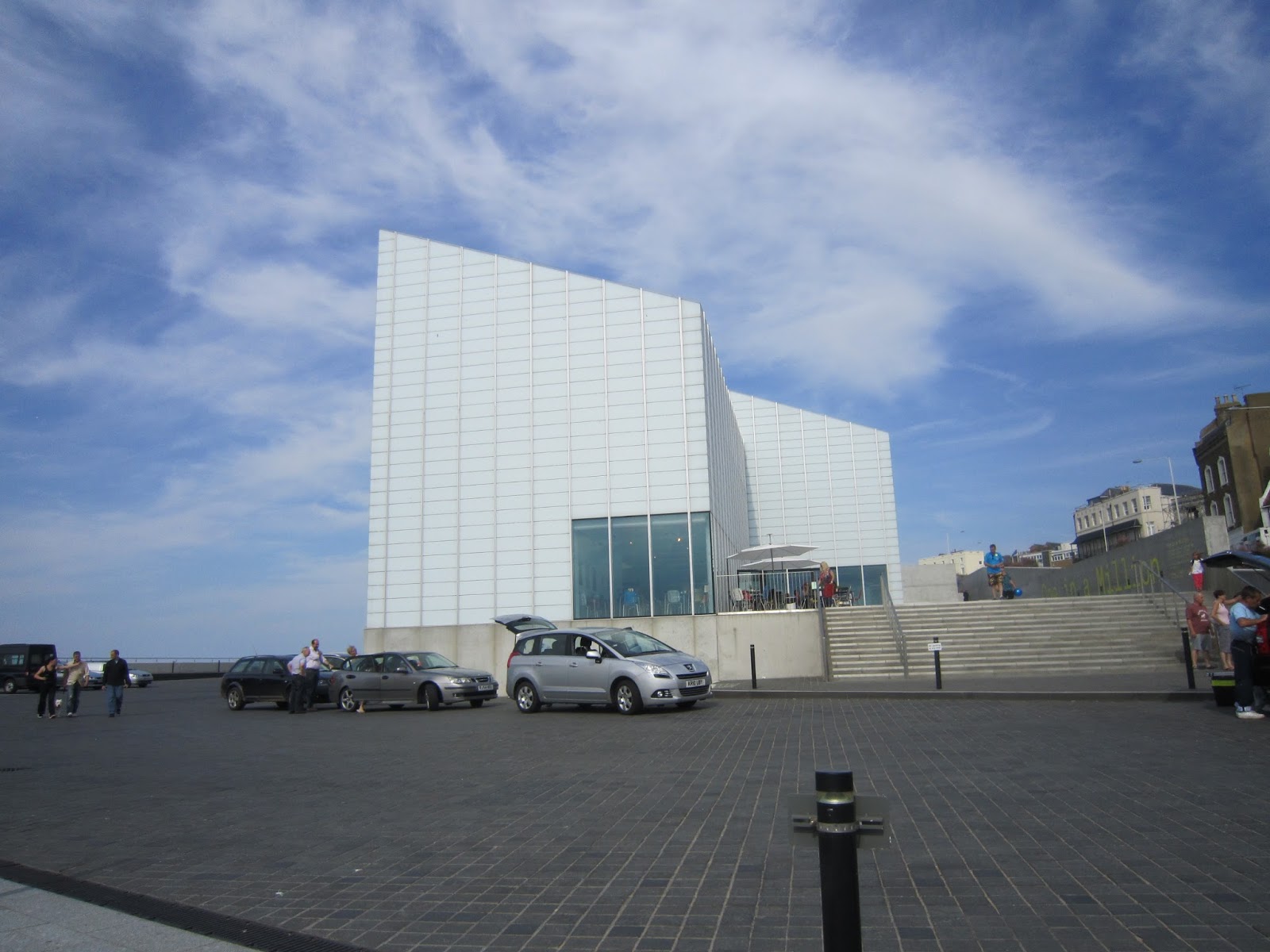 Curiosity killed the cat, so the saying goes, and I've always felt a little uncomfortable about my need to know more, to ask the awkward question, to poke my nose into other people's business. Luckily for me I spent most of my working life as a news journalist, a profession which legitimises those urges and enables you to ask people things that British reticence would normally rule out of bounds.

The other day I got the chance to combine two things that I love. We went to the seaside -  Whitstable, Margate and Broadstairs in Kent -  and I visited a new (to me) art gallery.
The Turner Contemporary gallery in Margate opened two years ago, and it's got a great position right on the sea front. Right now - until September 15 -  there is a fantastic exhibition which is well worth catching. Again and again as I looked around I found myself thinking 'There's a novel in that..'

The exhibition is called Curiosity: Art and the Pleasures of Knowing, and it combines fascinating artefacts with contemporary  art, the emphasis being on the quirky, the extraordinary, items with a story attached. Often the people connected to the objects were just as curious as the items themselves.


‘Like the cabinet of curiosities of the 17th century, which mixed science and art, ancient


and modern, reality and fiction, this exhibition refuses to choose between knowledge
and pleasure. It juxtaposes historical periods and categories of objects to produce an eccentric map of curiosity in its many senses’ says curator Brian Dillon.

So, there is a vast over-stuffed walrus, and Albrecht Durer's engraving of a rhinocerous. A cabinet belonging to diarist John Evelyn,decorated with inlaid wood and full of secret drawers; a stuffed penguin collected from one of Ernest Shackleton’s Antarctic expeditions. The dignified expression on the face of this beautiful bird was unforgettable.
John Dee was a mathematician and magician, an adviser to Elizabeth I. On show are his black mirror and crystal -  used for 'scrying' or predicting the future.  Alfie West was a champion cyclist in 1920s, who developed a method for  - literally -  splitting hairs, and making art from it. Nina Katchadourian takes self portraits  evoking 15th century Flemish art -  using materials available in an aeroplane's lavatory. It's an exhibition that makes you think about the  artist's imagination as much as the art that they make.

I came out of the gallery with my head spinning, full of inspiration and wanting to know more about virtually everything I'd seen. It reminded me of Rembrandt's curios in the Rembrandhuis in Amsterdam, which I've visited often. Rembrandt bankrupted himself buying rare and curious objects - Roman helmets, tortoise shells -  and visiting the lovingly restored house where he lived, I always valued his legacy of wonder. 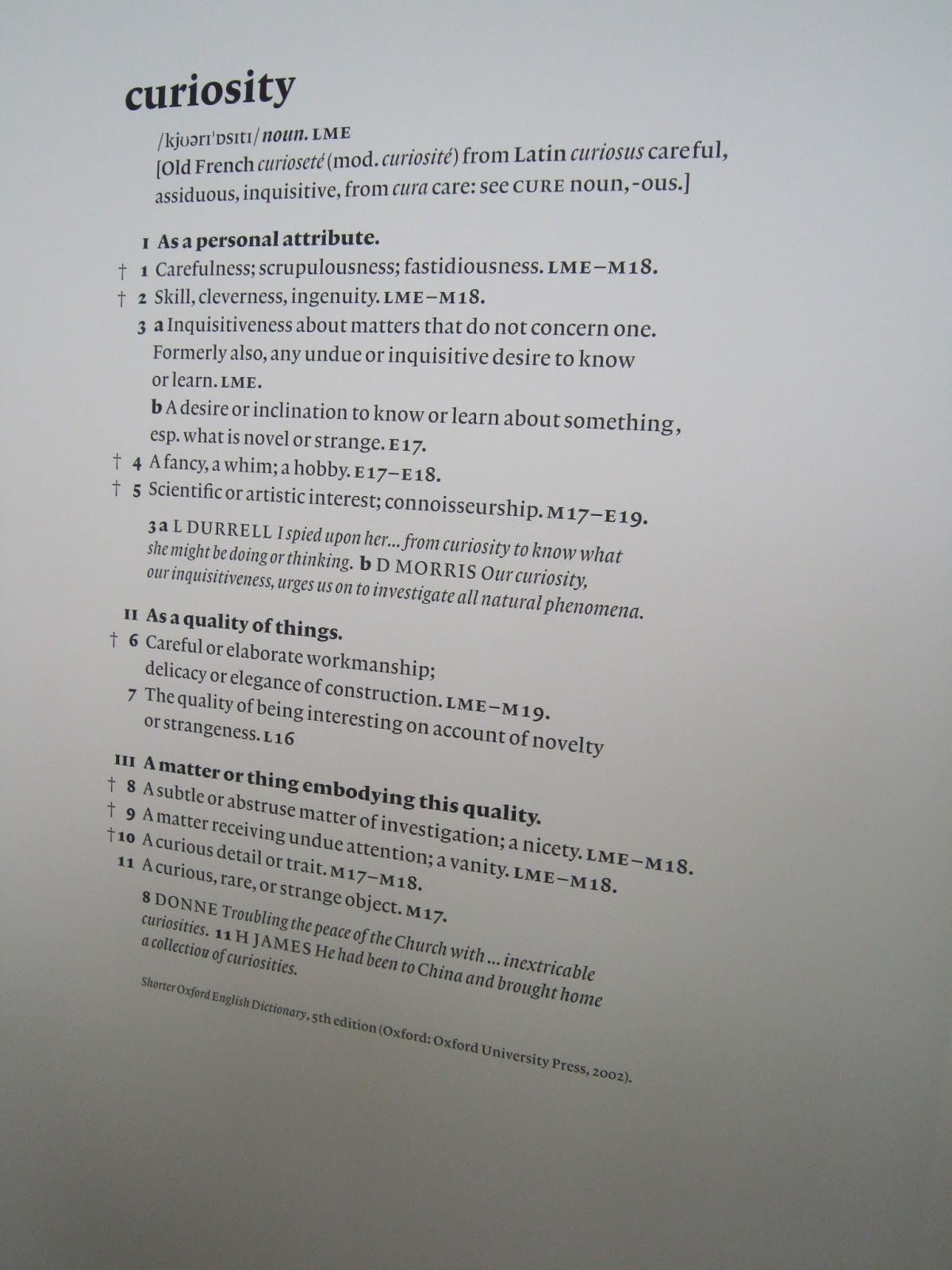 The Margate exhibition starts off with this dictionary definition of curiosity and it struck me how many of the definitions apply to writing. Above all 'Inquisitiveness about matters which do not concern one' is essential to writing fiction. But also careful (or elaborate) workmanship; skill and cleverness; scrupulousness; whim and fancy; a desire to know or learn about something.

And the best books are in themselves cabinets of curiosities, bringing together people and ideas and places and things that make you wonder and think and imagine.

If you're in need of inspiration, get yourself to Margate, where the  beach is as beautiful as the art in the gallery. And may all your works embody curiosity in all its forms - with no cats killed as a result.