Edward Thomas on The Somme ...... by Miriam Halahmy

This is my first blog post of 2014 and it is the year which marks the centenary of the outbreak of WW1. So it seems both apt and edgy to write a post about my visit to the Somme last summer and my pilgrimage to the grave of one of our greatest poets, Edward Thomas.
My brother Louis, a keen photographer and also with a great interest in  WW1, drove us to stay in Arras as our base for visiting the battlefields. 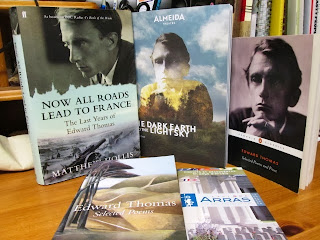 I knew that Edward Thomas was buried nearby. I had been reading about Thomas almost obsessively for two years; biographies, books by Eleanor Farjeon who was in love with him, poetry by Thomas and Robert Frost with whom he had a great and influential friendship and I had seen a play about them all at the Almeida Theatre. Thomas is thought to have walked more than any poet since Wordsworth and he went to war to save the countryside of England which he covered inch by inch during his too brief lifetime. 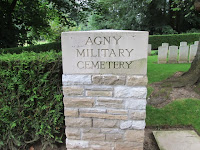 It was a beautiful July morning when we drove to Agny Cemetery where Thomas is buried. The cemetery is just a few miles south of Arras, and probably only a few hundred yards from the trench where he was killed by a stray bullet on April 9th 1917, on the first day of the Battle of Arras, Easter Monday.

In his notebook the day before he was killed, Thomas wrote a few notes :-

The light of the new moon and every star

And no more singing for the bird...

I have never understood quite what was meant by God

As we walked along a path towards the graves, poppies were nodding bright red amongst the high green corn and tears were welling in my eyes. 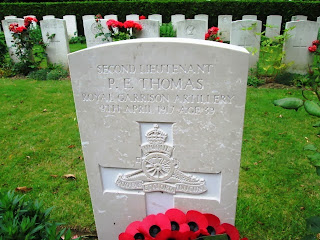 Thomas’s grave is well cared for as are all the graves in all the British cemeteries we visited. The War Graves Commission has honoured our dead as we should wish it. 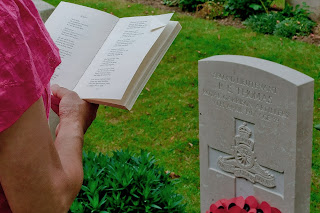 I stood in front of the stone and read the last three stanzas of Thomas' two page long poem,

Roads
Now all roads lead to France
And heavy is the tread
Of the living; but the dead
Returning lightly dance:

Whatever the road bring
To me or take from me,
They keep me company
With their pattering,

Crowding the solitude
Of the loops over the downs,
Hushing the roar of towns
And their brief multitude

Over the next two days as we drove and walked around the Somme and saw the cemeteries, memorials, craters and trenches and collected pieces of ordnance which still surface in the fields, I wrote in my notebook, as a writer must do.

The corn is high and green
poppies blare their old familiar red.
Today I am a poet on the Somme.

I find your grave and choke back tears
read aloud the lines which open,
... Now all roads lead to France...

We know you Thomas, your beauty,
your black mood, striding step across the Downs.
We know who loved you, Helen, Eleanor, Robert.

But to your left lies Soldier of the Great War
the white stone empty except for Kipling’s line
Known Only to God.

No-one comes to weep for him
read poetry and sigh
wish that he had lived.

I close my book to silence;
only the wind in the pine
and the quiet grass nestling at your feet. 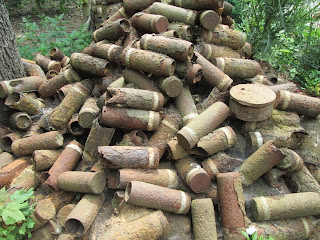 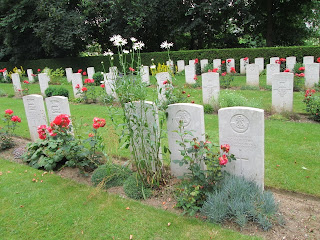 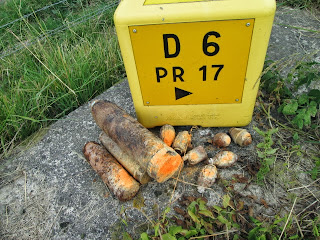 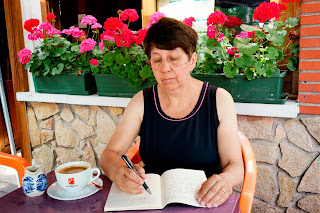