Taking my cue from Miriam’s post last week I’m also going to share the books that I read during my holiday because they are worth knowing about.  Over the course of a 'scorchio' two weeks on a fantastic campsite in Spain I was able to indulge in a feast of reading, washed down with jugs of sangria. It was such a luxury to spend hours engrossed in books in between swimming and trying to beat my kids at table tennis.

The only downside of not owning a Kindle is that packing books for a family of five takes up so much of your baggage allowance. However, our suitcases were significantly lighter on the return journey as we left many of our novels for others on the campsite to enjoy.


Call me weird, but when I’m on a beach I like to see how many people are reading from books and how many are using Kindles.  I can report that on the beaches of Costa Brava the vast majority of sun worshippers (of numerous nationalities) were reading physical books.  I saw very few Kindles which, though surprising, is reassuring to see that people are so loyal to books in their traditional form. 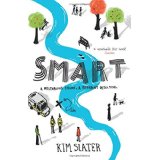 My first holiday book was ‘SMART’ by Kim Slater.  It had been on my ‘to read’ list for months, especially because it’s set in an area of Nottingham I lived in for several years.  I had high expectations for this story and it didn’t disappoint. It’s a tough tale told in an accessible way that will appeal to readers as young as ten and eleven.  Along with the grit it also manages to be moving and ultimately heart-warming and it’s a story that sits well alongside ‘The Curious Incident Of the Dog in the Night time’.  Kieran, the main character and narrator, is a gem of a creation; unique, resilient, open minded, idiosyncratic and adorable.

Whilst the author never labels Kieran, his behaviour and quirks make it clear that he has some form of autism.  His talent for drawing and fascination with Lowry is well used throughout the narrative.  He’s also an expert on all CSI type programmes and puts his knowledge to good use when he decides to investigate the death of a homeless man found in the River Trent.  The story deals with tough issues and could have been overwhelmingly depressing- e.g. Kieran’s home life is abusive with a violent stepfather figure and a mother who is the victim of domestic violence and unable to protect him.  However, the story is peppered with humour as Kieran is so optimistic and resilient and never views his situation as bleak.  I laughed out loud several times whilst reading ‘Smart’ and at other times my heart bled for Kieran as I willed him to have a happy ending.  I highly recommended ‘Smart’ for all ages and look forward to Kim Slater’s next book. 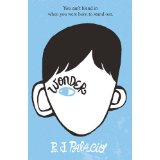 ‘Wonder’ by R.J. Palacio is a novel that everyone seems to have read.  It’s the multi-award winning and much loved story of ten year old Auggie, a boy with a facial disfigurement who is having to face school for the first time. I was looking forward to reading it at last. The story is certainly effective in showing how we must all look beyond the surface and be accepting and kind to each other.  I liked the fact that we got the point of views of different characters. I particularly found Auggie’s sister’s perspective to be insightful and loved the way the parents were portrayed (it’s a refreshing change to see great parents in YA fiction).  I was surprised that we didn’t get the perspective of the ‘bully’ boy, Julian as I was interested to know his inner thoughts but on my return home I discovered that the author subsequently wrote a novella devoted to the bully’s point of view.  It’s a heart-warming story that will be particularly effective with many younger readers.  Although I enjoyed it, I couldn’t shake the feeling that the story was designed solely to teach a moral lesson, but it seems to have had a positive impact on people’s attitudes and that’s a wonderful achievement. 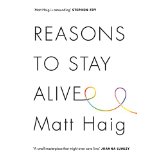 A book that certainly teaches a great deal without ever being preachy is Matt Haig’s ‘Reasons To Stay Alive’.  Matt’s non-fiction book about his depression and anxiety is brutally honest, generous and without vanity.  He relives his most dreadful experiences to help fellow suffers know that there is light at the end of the tunnel and that this cruel and dangerous illness isn’t something to be ashamed of.   This book is full of humour, humanity and brilliant advice.  It’s a must read for anyone suffering from depression and also anyone who knows someone in this situation.  This is a book that reaches out to people in their darkest hour and persuades them that they are not alone, that they mustn’t give up, because things can and will get better. Karen Joy Fowler’s  ‘We Are All Completely Beside Ourselves’ was a holiday read that left me pondering for days after I finished it .  A number of years ago I read, and thoroughly enjoyed, ‘The Jane Austen Book Club’ but her latest novel feels like it is written by an entirely different author.  Unfortunately someone had already told me the twist, so I read it knowingly from the very beginning, but this didn’t spoil the enjoyment of this remarkable story about Rosemary and her unconventional family.  I was so engrossed in this thought provoking and challenging tale that I could hardly bear to put the book down.  I loved the writing style and the way the narrator speaks directly to the reader.  I was absolutely invested in the story and the debates it throws up and was desperate to discuss it with a fellow reader.  This has got to be one of my books of the year! 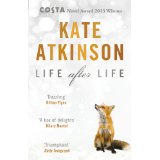 I found that I raced through Kate Atkinson’s Costa Award winning, ‘Life After Life’, despite it being a weighty tome and having a complicated structure that demands the reader stays alert.   It’s a beautifully crafted story of Ursula Todd a girl born in 1910 who keeps dying at different stages only to be reborn to live her life again and again. I found the most absorbing parts of the story were set in Germany and in England during the Blitz.  I’m in awe of the amount of research Kate Atkinson had to undertake for this book but it certainly paid off.


I hope that people have found time to read this summer.  If anyone has ‘must-read’ recommendations please let me know.
Posted by Edge Writers at 11:39