WHEN THE UKYA AND UKMG EXTRAVAGANZAS CAME TO NOTTINGHAM

Paula Rawsthorne applauds the organisers of the brilliant UKYA and UKMG Extravaganzas for bringing authors, en masse, to the cities of the U.K.

So many of the big literary events only happen in London.  But, stating the bleedin’ obvious, there’s a fantastically rich cultural landscape outside the capital too and YA authors Emma Pass (Acid)  Kerry Drewery (A Dream of Lights) know that regional cities deserve to be at the centre of exciting events just as much as London.  That’s why they organised the wonderful UKYA and UKMG Extravaganzas.


The inaugural UKYAX was held in February this year at Birmingham H.S. Waterstones. It sold out within hours and showed that there was an eager audience who wanted to meet YA authors and learn more about their work.  UKYAX came to Nottingham Waterstones in October and the first ever UKMGX also rolled into town and was held at Nottingham Central Library.


Each of these events involved over 30 authors from all over the UK and brought together writers with readers and bloggers. The events helped to showcase the wealth of YA and MG books by UK authors and also  enthused readers, young and old.


Before the Birmingham and Nottingham events, Emma and Kerry organised blog tours featuring all the participating writers. It was a great way to hook up writers with our supportive UK bloggers and each post provided a unique insight into their books and writing world. 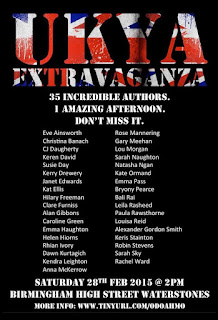 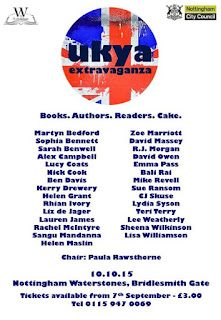 I was asked By Emma and Kerry to chair both the UKYAX and UKMGX held in Nottingham on consecutive Saturdays.  It was an absolute pleasure to be in a room so full of enthusiasm for reading and stories.  Readers of all ages got to chat with authors as well as discover new books and it was clear that the events help to break down barriers between the two.  Since the Nottingham events I’ve been told by several parents that their children haven’t stopped reading!


The format of the event worked very well with panels of authors having two minutes each to speak, followed by five minutes of questions from the audience.  This kept the event flowing nicely and democratically and made authors hone their anti-waffling skills.  An essential aspect to the event was the regular breaks which allowed the audience to eat cake, mingle with the authors and get books signed 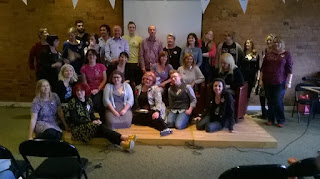 
The UKYA Extravaganza at Nottingham Waterstones was well attended with a mixture of teens, adults, bloggers, librarians, teachers etc.  Kerry and Emma made Waterstones’ impressive ‘Sillitoe’ events room look festive and welcoming with UKYA bunting, balloons and name badges as well as a table full of swag for the audience.

UKMG Authors at Nottingham Central Library
The first ever UKMG Extravaganza was held at Nottingham Central Library and the librarians did a wonderful job of preparing the room and the refreshments.  The event was absolutely packed, with many people having to sit on the floor. The format was the same as for UKYAX only the MG authors used more props during their two minutes (always a good thing) and John Dougherty even whipped out his guitar which went down well! 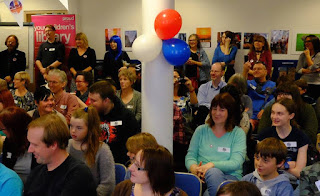 Emma Pass told Sheena Wilkinson  “We wanted to bring together authors from all sorts of publishers, big and small; to have a big author event which wasn't in London and which put everyone on an equal footing -- and where the readers aren't cut off from the authors. The mingling in between panels, and the informal party afterwards, was very much part of this approach.”

The after party at Nottingham Writers’ Studio was a chance for some writers to get to know each other in the real world as opposed to on Facebook and Twitter.  It really was a great end to a wonderful day.

After its great success I know that Kerry and Emma are all fired up and are  busy organising the next Extravaganza which will bring writers from all over the UK to the mighty city of Newcastle.  So watch this space for more details! 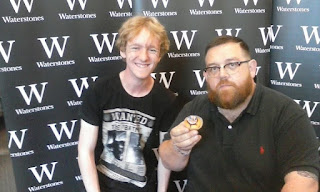 Paula Rawsthorne is the author of the award winning YA novels ‘The Truth About Celia Frost’ and ‘Blood Tracks’. She is part of ‘The Big City Read Anthology’ and a writer in residence for ‘First Story’.