When I was in elementary school, I was the kid who would sit on her hands and pin her lips shut tightly when the teacher would ask a question. I’d repeat my answer over and over in my head, but I didn’t dare raise my hand. What if I was wrong? I didn’t want to look stupid.


When I talk to children and teens about becoming a writer, I always tell them that I found success as a writer when I stopped worrying about looking stupid. Some of the best ideas evolve from stupid, silly and downright bad ideas. 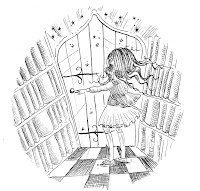 I love creating stories with students. I often use a story starter – like this illustration from my Magic Trix series. What’s behind this obviously magical door? I’ve had young students ask me if it’s okay if the door opens into a fairy world with dragons or triggers a trap door into a pile of skeletons. Yes and Yes! is always my answer, but I’m sad that they have to ask me if their wild ideas are acceptable. I think they have the impression that there is a right and a wrong answer.


I did a little tally of the fiction that is saved on my computer. In the past nine years – since I moved to the UK – I’ve started eleven novels and more than forty short stories. Only a handful of those have been published. One of my tutors called these personal slushpiles – apprentice pieces. I learned something from writing each one. And, maybe I had to work through these bad ideas to find the one that would eventually sell. No writing is ever wasted.


I still find that, from time to time, at grown-up cocktail parties when someone asks what my books are about…I pause just a moment before telling them about a country trapped under an electrified dome, cults that worship mountains, a beauty queen destined to save the world, and a witch training to be a fairy godmother. These might sounds like strange ideas but I hope they’ve grown into engaging stories. And I’m no longer afraid of looking stupid – maybe I’m just used to it. 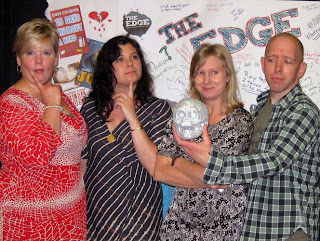 Fellow EDGE author Dave Cousins recently directed me to a quote from the American jazz musician Miles Davis: If you hit a wrong note, it's the next note that you play that determines if it’s good or bad.


And if you want to be a published writer, the important part is that you just keep playing. There’s no such thing as a bad idea because stupid and crazy and silly are often gateways to great stories

Sara Grant's first teen novel Dark Parties – a dystopian thriller for teens – was published last year on Orion’s Indigo imprint (Follow Indigo on Twitter @fiercefiction). Half Lives will be published in May in the UK and July in the US. Learn more about Sara and her books at www.sara-grant.com or follow her on twitter @authorsaragrant.