POWER TO THE PUPIL!

I’m a big fan of regional book awards because I’ve seen, first- hand, how successful they are in getting young adults reading.  Over the past year I’ve attended award ceremonies in Leeds and Sefton, been a guest speaker at the St.Helen’s Book Award  and done events with schools involved with the Nottingham Book Award.  I’ve seen the buzz about books that they create when numerous schools across a region come together to  discuss, debate and decide their winner.


Library Services, school librarians and councils work hard to organise their region’s awards because they can see the benefits.  I’ve been told by several organisers that an important reason for instigating this type of award is because it was clear that the pupils wanted to have a say in what books were nominated and they definitely wanted their vote to decide the winner.   This seems understandable; after all, the books are written for them.


By giving pupils the power to influence the shortlist  and decide the winner the librarians have found that more pupils want to get involved.   It’s a lot less appealing to young people  to invest their  time and enthusiasm in book award processes were they know that their participation and vote has no impact on the outcome 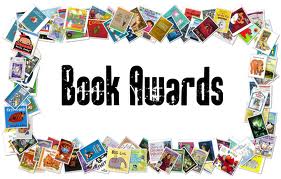 The aim of the regional awards tends to be to encourage reading for pleasure, debate and critical appreciation They want to involve young people in decision making and encourage  cross-school collaboration.


From what I’ve witnessed, all these aims are being admirably met.  The pupils post their thoughtful reviews on the award website.  The workshops bring schools together from all over the region to debate the shortlist and, in some areas the pupils produce videos, artwork and pieces of drama inspired by the books.  And, after they ‘ve cast their votes, the winner is announced at an award ceremony.


The organisers go to a great deal of effort to give these ceremonies a real sense of occasion. The participating schools gather together in theatres, civic centres and central libraries .The local press are present, sometimes even the Mayor!  Shortlisted authors are invited and often a  guest of honour is in attendance.  There are, talks, presentations, speeches and a chance for the pupils to meet and question the authors.  There’s a real build-up of excitement leading to the moment when the sealed envelope is opened and the winner announced (Oscar-style).  When the ceremony (which importantly, is never overlong) ends, everyone  seems to be buzzing about books.


So I’d like to say a big thank you to all the librarians and councils who enable the regional book awards to happen and, of course, to all the kids who get involved.  Power to the pupils!  May the regional awards  go from strength to strength.
Paula Rawsthorne is the author of the award winning, The Truth About Celia Frost.  www.celiafrost.co.uk

Her new novel Blood Tracks will be published in June 2013.
Posted by Edge Writers at 16:14