Thanks, Caitlin! by Keren David

So, I was going to post about something else completely and then the awesome Caitlin Moran, fabulous journalist and author of the brilliant How to be a Woman, was interviewed about her new YA book in The Bookseller. Her first and only YA book. 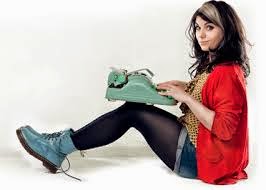 Moran, who said she would always write about “fat, gobby teenage girls”, argued that writing about sexual adventures was important for that age group.  “I grew up reading Jilly Cooper at the age of 13; I think it’s really important which sexy books you read - particularly when you’re a girl," she said. "These form your sexual imagination and I wanted to get in there before anyone else and talk about sex.”

Anyway, the article went on:


And that seemed odd to me, because does anyone really think that all the teenage girls in books for teenagers are being bitten by vampires? Surely not. But then I looked again and focussed on 'you don't see teenage girls anywhere' and I thought, she's not talking about the books that get written, she's talking about the books that get talked about in the mainstream media. Because we all know that books about girls and love and sex and all that girly stuff don't get a lot of attention in the mainstream media, unless, as happened in the Daily Telegraph recently, they are being dismissed as 'teenage schlock'.  And frankly if you rely on the mainstream media for information about YA, you probably think it's still all Twilight and Harry Potter and Hunger Games, and isn't there someone called Meg Rosoff?

Anyway, as the queen of Twitter, I am sure Caitlin knew that the UKYA world would respond appropriately with an awesomely positive hashtag #caitlinmoranshouldread recommending great YA books about girls who do more than kiss vampires, I mean get bitten by vampires. Among the names mentioned were Cat Clarke, Katie Dale, Keris Stainton, Sophia Bennett, Liz de Jager, Rae Earl,Sarra Manning  James Dawson...I could go on and on.
Naturally I took the opportunity to mention my own Lia's Guide to Winning the Lottery, about money and sex and inequality and Islam and...just read it, Caitlin, please, read it, because if you recommended it on Twitter I'd be so happy.
And even happier if you went on and read  other YA books as well, and tweeted and wrote about them, because girl-centred YA really needs a great, outspoken champion with a loud voice that people listen to. I really hope that's going to be Caitlin.

So, welcome to the world of YA, Caitlin,  where lots of people write books about lots of things, and we generally read eachother's stuff and tweet enthusiastically about it, and only take offence very occasionally. I'm looking forward to reading your book, because I love your writing. And I look forward to you reading lots of ours.